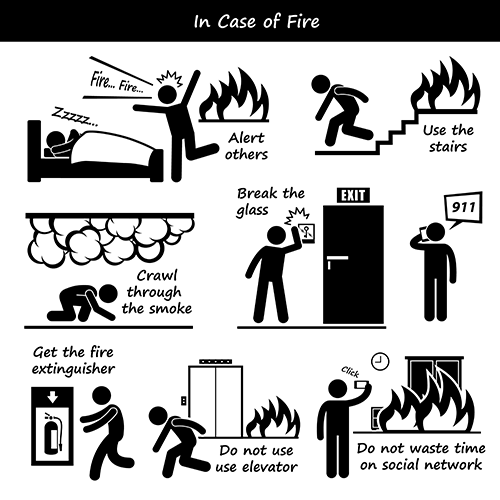 On Tuesday, July 18, 2017, I received the notice we all hope to never get, our Mariposa office was ordered to evacuate due to a fast-moving wildfire that was threatening the town of Mariposa. Now, this fire was no surprise. Fire is a constant threat to this community, as it is to many mountainous regions. But with all the rain earlier in the year, this fire season was likely to be worse than recent history. Knowing all of that, were we ready when that call came? Yes and no. Though the fire is now nearly contained and my staff was fortunate to not lose any of their homes, I want to share some of our lessons learned from the Detwiler Fire so you can hopefully be more prepared if a natural disaster or other emergency should occur in your community.

A little bit about the Mariposa area. Located in the foothills of the Sierra Nevada Mountains, Mariposa is the home of the central portion of Yosemite National Park. Sparsely populated, much of Mariposa County is grasslands, shrubs and a variety of trees. Due to years of drought and recent bark beetle infestations, millions of the Ponderosa pine trees are dead. There are three main routes into Mariposa—Highway 140E from Merced, Highway 49N from Oakhurst, and Highway 49S from Coulterville.

The Detwiler Fire was first reported on Sunday, July 16, in the afternoon in a remote area near 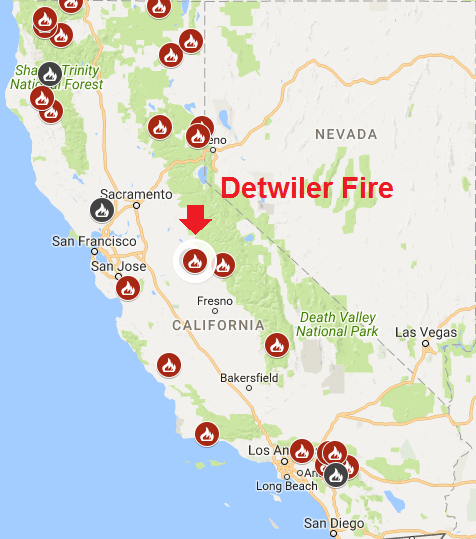 Lake McClure. Being relatively new to the Mariposa region and this whole concept of wildfires, I wasn’t sure how concerned I should be about the fire but fortunate for us, several staff had contacts in emergency services so we were receiving regular updates. The fire was growing quickly, doubling in size each day. California fire resources were already stretched thin fighting fires all over the state, so this fire initially had little resistance and lots of fuel.

By Monday afternoon, the County Administrative Office (CAO) had reported business as usual, but due to the unprecedented rate of burn and direction, the fire was being watched very closely. Though additional fire crews were arriving every hour from all over the state, staff was advised that evacuations may be necessary. The community was also advised of possible home evacuations, so each employee began packing up their valuables and treasured items. It’s amazing how much clarity you have of what’s truly important when you realize you only have space in the trunk of a car.

By Tuesday morning, I was in Merced giving our annual Child Support Awareness Month presentation to our Board of Supervisors. At the same time, the Mariposa CAO had announced that power may need to be cut from county facilities and if that were to happen then all non-essential staff was to go home. I was texting back and forth with the Supervising Child Support Specialist to gauge activities and decide next actions. By 10:30 that morning, we made the decision to evacuate the office. The official evacuation from the CAO’s office came right before noon. 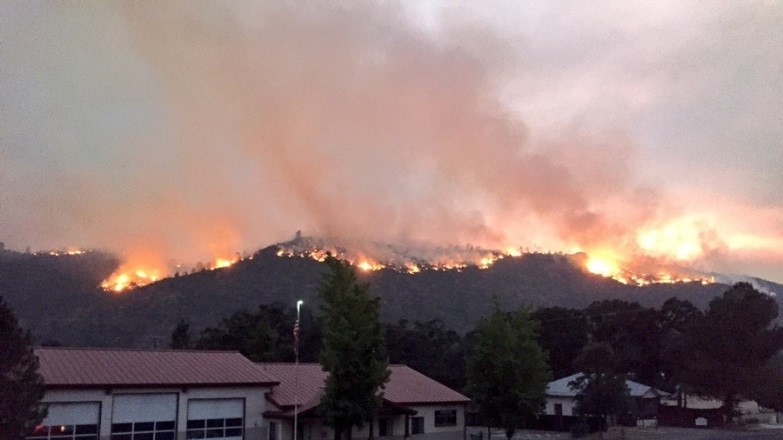 Several staff had to drive down the hill to the Merced area and both Hwy 140 and Hwy 49 were being threatened by the fire. Two employees were able to travel to Merced via Hwy 140, but the third was cut off by the fire and had to travel an alternate route via Old Highway Road, a poorly maintained mountain road. Her journey was a white-knuckle drive of crawling down the mountain while fire trucks rushed past to get to the fire that was now threatening the town of Mariposa.

The staff that remained in the area were all able to evacuate to family members residing nearby but further away from the immediate threat. By Tuesday evening all routes into Mariposa except Hwy 49S to Oakhurst had been overrun by the fire and were closed to non-emergency vehicles. All that was left to do was watch and wait.

Back in Merced, I was struggling to determine where everyone was and if they’d made it down the hill safely. Cellular service is mediocre at best up there. First of my lessons learned was communication is key. Making sure I had everyone’s personal contact information in my phone was a must. I had recently done this as part of updating our department’s Business Continuity Plan. In a smaller office, this is very practical. In a medium or larger office, a chain of communication is more realistic, such as executive staff distributing a message to mid-level management and then each mid-level manager distributing to their own distribution list of staff.

Though we had everyone’s personal contact information, we didn’t know where they evacuated to until we were able to make contact with each team member. Additional lessons learned included a need to update contact information annually and to ask staff the question of where they would evacuate to if an evacuation was ordered. Including this information on the emergency contact sheet enables the office to know likely whereabouts of staff in cases of evacuation.

By Tuesday evening, we had established a text messaging group and knew where everyone was. We also had all joined the Mariposa County Sheriff’s Emergency Alert System which was giving regular updates on evacuations and fire notices. One thing I had to keep reminding myself was those who remained behind were without power, or were relying upon generators. While we were desperate to know the fire’s progress, staff’s wellbeing, and the wellbeing of their homes, keeping the texting to a minimum was necessary due to limited charging capabilities.

On Wednesday morning, those staff in the Merced area were able to come to the Merced Office to work. In anticipation of relocating staff due to the evacuation, we had set up access in the Merced Computer Lab with telephones. They would have access to the internet and CSE as well as phones for any calls.

The Mariposa office has a clean desk policy, so any documents they may have been working on at the time of evacuation were secured in a locking cabinet. As they didn’t have access to those documents, staff wasn’t able to pick up where they left off on Tuesday. Depending upon the type of emergency, if time permits, a suggestion would be to scan in and route via e-mail all working documents. Staff is then able to retrieve the documents via web mail and can then complete the work they had as well as any other normal activities via CSE. 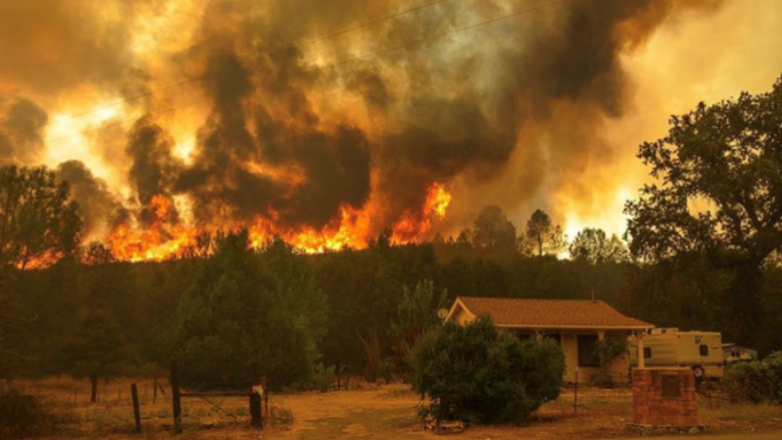 In an effort to track the fire’s progress, we printed out a CalFire map of the county with an overlay of the span of the fire. Then we noted where the office and staff’s homes were. Updates were continuous, both through official and unofficial channels. A lesson learned was to gather information from any source available. Facebook was an amazing tool for the community to come together and share updates. Users that monitored scanners would share out updates so others knew where the hot spots were and where fire crews were concentrating efforts. Others would just post pictures of the fire’s progress and give updates to the community on the status of homes. The CalFire and County Office of Emergency Services (OES) teams did a great job providing nightly town hall meetings to update the community on progress and next steps. These meetings were live-streamed through Facebook, so we were all able to watch them. The caution with all of these great sources is you run the risk of information overload and can find yourself so wrapped up in watching the updates that you do little else.

By Wednesday morning I wanted to know the status of the building. The fire had progressed to the edge of town the night before and I couldn’t determine how the building had faired. I contacted OES and they recommended I drive up on Thursday morning. Due to road closures, the normal 45 minute drive took over two hours. Fortunately, the office had suffered no direct damage. The fire had come over the hill across the highway and made it about midway down before fire crews had been able to stop it. In later reviewing maps, the point near Hwy 49N and our office was the closest the fire got to the town, stopping about 300 yards away.

The supervisor and I quickly checked the office and confirmed all information was secured. As the fire was not officially contained in that area and was still considered an active hotspot, we considered removing the county vehicle and took the precaution to copy all of the budget documents for the last three years on a flash drive to enable working on the budget from a remote location. At that point, we didn’t know how long it would be before the evacuation was lifted and we were planning for the potential of working in Merced for a period of time. Due to road closures, those staff still in the Mariposa area would not realistically be able to travel to Merced to work. I reached out to Madera and they graciously offered to house several staff if the evacuation was not lifted in the near future. The outpouring of offers to assist from counties near and far was comforting.

By Thursday evening, the winds had shifted; the fire direction turned away from Mariposa and was heading north towards Coulterville and south towards Catheys Valley. Several staff member’s homes were south of town and continued to be threatened through Friday. By Friday afternoon, evacuation notices were beginning to be lifted for the town and various residential areas. The last staff member was able to return home by Sunday. Due to five days of power outages throughout the community, all residents were advised to discard all perishables in their refrigerators and freezers. An unanticipated loss, but staff was grateful to have homes to return to.

In the end, the Detwiler Fire burned over 81,000 acres in a span of five days. Sixty-three homes were destroyed. The community is coming together to support each other as they recover from the fire. I have learned many valuable lessons from what was for us a near miss. First, make sure you have a communication plan in place so you can quickly and efficiently communicate with your team. Second, scan in and route active work so staff can retrieve remotely. Third, use all information sources to get up to date information. Fourth, have your contingency plans ready— where staff would go, what activities can be performed remotely, and what activities must be performed on county systems. Lastly, be grateful for what you have and for the tremendous support from the child support community around you. 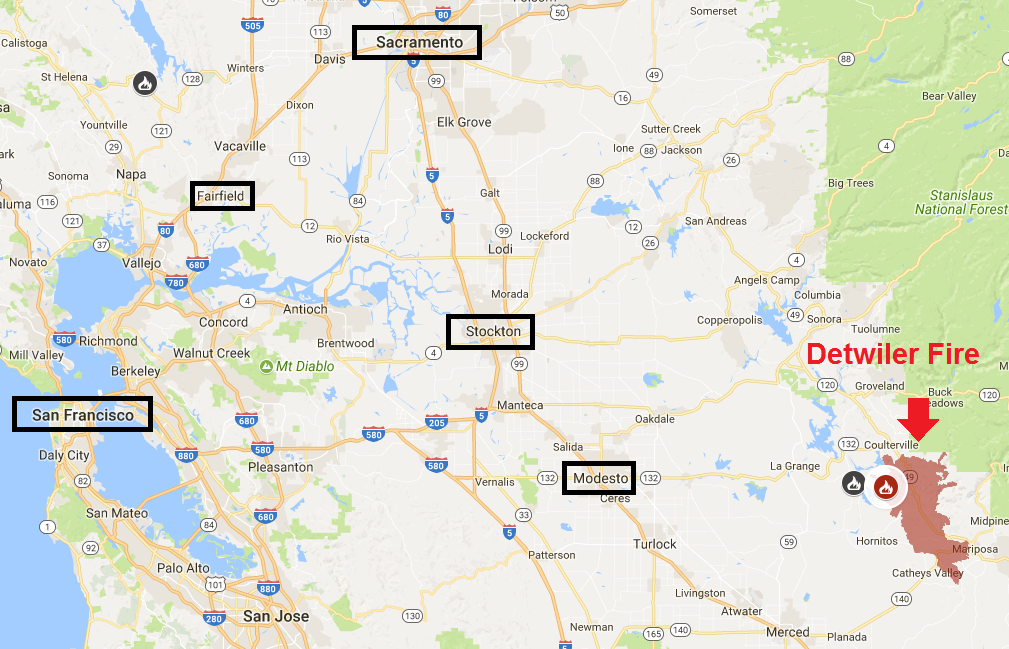