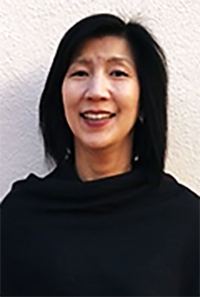 Written by Carmac the Magnificent

Question: Why are you an attorney?

My Uncle Sam was an attorney and I always admired him and wanted to follow in his footsteps. As an adult, I learned he was the first person of Korean-American to pass the California bar exam.  His two friends and he drew straws on who would take it first and my uncle drew the short straw.  He practiced in many different areas and held many positions, include the Attorney General for the Territory of Guam.  Former federal OCSE commissioner Margot Bean remembers my uncle from their time together in Guam.  My uncle always fought for the underdog and made court sound so glamorous that I decided to become an attorney to help others as well.

Question: What were your school mascots?

I became an Anteater when attending UC Irvine from 1983 – 1987. I received my Bachelor of Arts in Social Ecology with a focus on liberal arts and criminal justice coursework.  Then I moved to Washington, DC to attend Georgetown University Law Center, graduating in 1990 with a Juris Doctorate degree.  I attended lots of Big East basketball games when Alonzo Mourning and Dikimbe Mutombo were on the team.  During the game, we yelled “Go Hoyas” but to this day, there is no consensus on the definition of Hoya.

Questions: Where have you worked as a Child Support Professional?

I started my child support career as the Family Law Facilitator for the Los Angeles Superior Court. The staff were housed in 13 courthouses around the County and helped thousands of case participants each month.  Nobody knew the extent of the need but once we opened our doors, we were deluged with parents.  I moved to Los Angeles CSSD to serve as a Deputy Director when it was newly created in 2002.  My time in Los Angeles was very hectic with frequent visits from Curt Child in the early days.  When I left in 2008, I was the CCSAS Coordinator for the big conversion to CSE.  In Sonoma, we achieved great success in improving on the federal performance measures.  With innovative ideas and hard work, we consistently landed in the Top Ten, a reflection of everyone’s efforts.  I joined the County of San Luis Obispo DCSS.  I have enjoyed working with the dedicated staff that values performing well.  Staff are self-motivated to keep our performance numbers up.  I have also liked going back to Court to talk to our case participants about the challenges families face in raising children.  Seeing them every week reminds me of the importance of our work.

Question: What do you during your personal time?

I love baseball, especially the Dodgers (Go Blue!), and enjoy going to games. During my travels around the nation, I have visited all 30 MLB ballparks and tried the local fare.  The hot links at Wrigley were good and the brats in Milwaukee were spicy, but I always prefer the grilled Dodger Dogs on a warm summer night.

Question: On what television show has my family member appeared?

I have identical twin nieces who worked in “Hollywood” when they were infants. They worked on ER and CSI-NY.  However, their most memorable appearance was on Six Feet Under.  In a dream sequence, a gay couple is standing in the kitchen talking about adopting a baby.  One man, the actor who later plays the mass murderer Dexter, opens the pantry and a baby is sitting there.  The two men are overjoyed with this child, a Chinese baby.  That child is my niece Savanna, who, by the way, is not Chinese.  She is thirteen now but still sweet as ever.  Watch the clip:  Click Here to Watch the Video