I am the third of four daughters born to an ironworker father and a homemaker mother. Although the “homemaker” label has changed over the years and may no longer be politically correct, that is what my Mom still proudly calls herself.  I have always lived in Contra Costa County and Martinez was my hometown growing up.  Although money was tight in my earlier years, we had all of the basics and, on occasion, a few extras.  Most of the “extras” were due to our hard work.  Dad believed that we had to work hard for what we had; nothing was free, so one year he took a vacation over our spring break and we poured concrete in our backyard and built a retaining wall.  Not my idea of a fun vacation, but the concrete eventually (during the next “vacation”) became the surround for a doughboy swimming pool Mom found on clearance at Montgomery Ward.  We dug the hole, hauled rocks away, spread and smoothed sand, cemented in the metal brackets, put up the metal siding, inserted the liner, and after what seemed like days of waiting for it to fill with water, we were the first family in our neighborhood with a pool!  My sisters’ and my popularity went up exponentially! 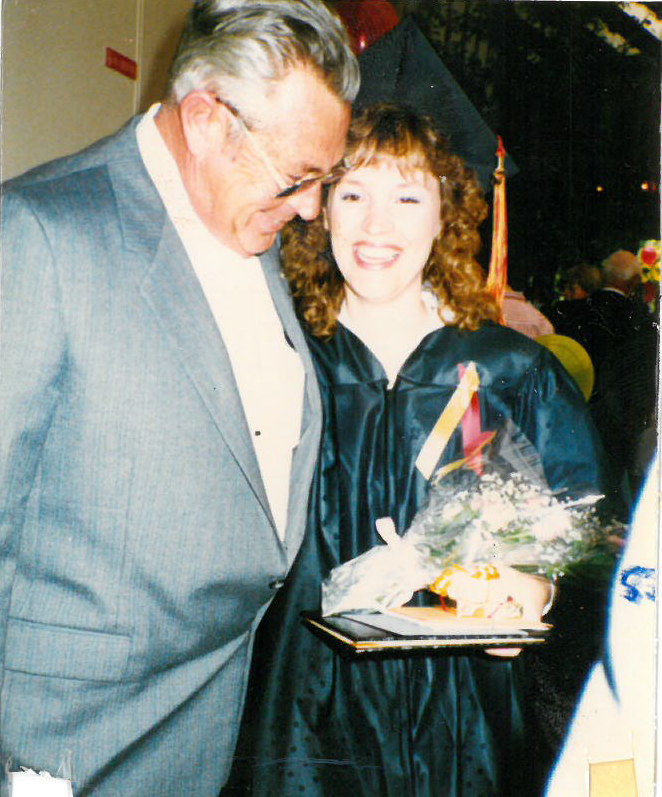 My parents always encouraged us to work hard in school and good grades were rewarded.  It was easy for me because I loved school and loved to read.  Although I enjoyed playing with baby dolls when I was little, I had no plans to get married and have children because I wanted to be a lawyer like Owen Marshall Counselor at Law and Perry Mason.  It never dawned on me that they were men and I wasn’t.  I just knew that was what I wanted to do.

After I turned 16, my parents scraped enough money ($500) to buy me a car.   A green ’67 Mercury Montego I called “The Green Machine.”  The deal was that I could only drive it if I could pay for gas, insurance (which was around $50 a year on my parents’ plan—but I had to get good grades!), and maintenance (most of which Dad performed; I had to buy the parts and oil).  So, although jobs were really hard to come by, I landed a job at McDonald’s.  It wasn’t glamorous and wasn’t really my thing, but I earned a whole $1.50 an hour (gasoline was under 50 cents back then) and it opened a door that shaped the rest of my life!  One day, I was talking to one of the managers and he asked me what I wanted to do when I graduated from high school.  I told him I wanted to be a lawyer, but I couldn’t afford college, so I planned to work as a secretary and go to night school.  It turns out that he had recently passed the bar exam and was starting up a law practice in Fairfield, so he offered me a job as a legal secretary after I graduated from high school.  Thus, my journey in the legal field began.

Over the next 10 years, I worked as a legal secretary and office manager while attending college at night.  Finally, after working by day and learning by night, I graduated with a Bachelor of Science in Business Administration.  The first in my family to earn a college degree.  Along the way, I fell in love with a guy I knew for many years and we started a life together.  Upon my graduation, knowing that I wanted to be an attorney, he encouraged me to go to law school.  I didn’t really think it was possible, but I decided “Why not!”  So, with the full support of my then boyfriend and now husband of almost 30 years, Bob Dundon, I went to law school.  It was the same deal as with my college degree—work by day and learn by night.  I was fortunate that there was a night law school in Walnut Creek and although it was a 4-year program, I managed to survive it and pass the bar exam on the first try.  Throughout much of my college and my entire law school career, I worked for a law firm in Lafayette as a legal secretary and office manager.  When it looked like I was actually going to become an attorney, they asked me if I was interested in domestic relations.  In my head, the response was a resounding NO!  Anything but that!  However, it was 1991 and even the really smart people graduating at the top of their class from Harvard and Stanford were having a hard time finding a job, so I said, “Yes!”

For the next 10 years, I practiced family law and eventually became a certified family law specialist; although I was good at it, I didn’t really like practicing family law. Helping families break up, the custody battles, the fighting over the toaster (which was probably broken)—none of that gave me purpose.  A colleague one day suggested I consider going to work for the new Department of Child Support Services.  I looked into it and decided to apply.  I interviewed and shortly thereafter, right around 9/11, I received a call offering me an advanced attorney position.  I accepted, started closing my practice, and by mid-October 2001, I went to work for the Contra Costa County Department of Child Support Services!  My first day at Contra Costa DCSS was the best day of my career, and I knew I had finally found my purpose.

I had good computer and organizational skills and they were noticed.  As we were nearing our conversion to the CASES system, I was asked to participate in the business process redesign committee to help identify changes needed for the legal processes of the department and to help train the attorneys on the new system.  Part of the offer was that I had to attend a two-week training of CASES in the Santa Clara DCSS offices, then in Milpitas.  I had to respectfully decline because I had just gotten my first puppy, Parfait, a Cavalier King Charles Spaniel, and I was so in love with her that the thought of being away was inconceivable.  She was also in puppy school and I didn’t want to miss out on any of her training.  We reached a compromise where I would only go for the case management portion of the training (because the attorneys didn’t really need to know much about the financial portion of the system anyway), and it turned out to be a great decision.  My work on business process redesign, training, and other enhancements to the legal part of our department, including the process for having orders prepared live in court, ultimately won me a 2005 WICSEC award for Outstanding Individual Achievement for Technical/Line Staff.

In 2006, I left Contra Costa DCSS and went to work as the managing attorney for San Francisco DCSS.  During my tenure in San Francisco, I had the opportunity to manage the attorney and legal teams, the EPIC, training and outreach teams, and was change management co-lead for our conversion to CSE.  I assisted the department in setting up our outreach to the jails and the creation of Job Support, a program to assist parents in obtaining employment, to name a few of the projects and programs I managed. 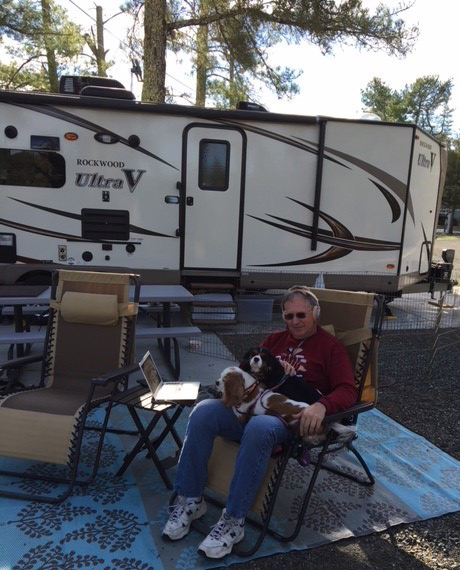 In 2011, following George Nielsen’s retirement as the supervising attorney for Contra Costa DCSS, I made the decision to return to Contra Costa DCSS as the supervising attorney, which gave me the ability to spend more time with my husband, our 3 dogs, my parents, family and friends.  Instead of the hour-long commute into San Francisco, I had a 10-minute (12 if I hit any lights) commute to work and my parents lived about 3 minutes from my office.  I am a member of the Legal Practices Committee and the Attorney Faculty Training Committee, having been chair for 5 years.  In January of 2017, I became the director of Contra Costa DCSS and it has been an amazing journey so far.  I am blessed to work with wonderful, dedicated people who truly care about the work they do.  Although we are shrinking in numbers, we continue to do excellent work for the children and families in our community.

When not working, I love to cook and can often be heard talking about my Joule sous vide and the wonders of cooking with it, and my most recent kitchen appliance addition, my Instant Pot.  I play bocce ball on Thursday nights during bocce season, and Bob and I enjoy good wine and camping in our travel trailer with our dog, Lexie.  A year or so ago I took up playing the Ukulele, and although I’m not very good, it’s a lot of fun. 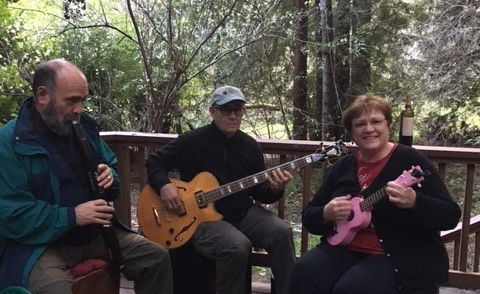 The picture is me pretending to jam with a couple of my friends who are true musicians. We have amazing parties because we have our very own band!

Bob and I have a dream for when we retire, sometime down the road, to sell our big house, downsize into a small “home base,” and hit the roads in an RV to see our great country, coming home occasionally to visit our family and friends. Meanwhile, I carry on trying to figure out how to be a good director and support my staff and my community.