Well, a lot has taken place since the last time I updated you on the Banding Toolkit back in the September 2017 issue. I wanted to take this opportunity to update you on where we are and what the future holds. We are excited that the Banding Toolkit is available to counties that want to utilize the tool. You can find the toolkit on the LCSA Secure Website (CPQ\CS1257 Based Performance Reports and Data\ DR Based Reports\ BANDING). We have been receiving some great feedback from counties that are using the tool and are working on ways to make the toolkit even better.

If you remember from the September issue, the Banding Toolkit was created in MS Excel and consisted of three pivot worksheets that allowed caseworkers to drill down to cases that may need intervention: Monthly Banding, YTD Banding, and Arrears Distributed Banding. 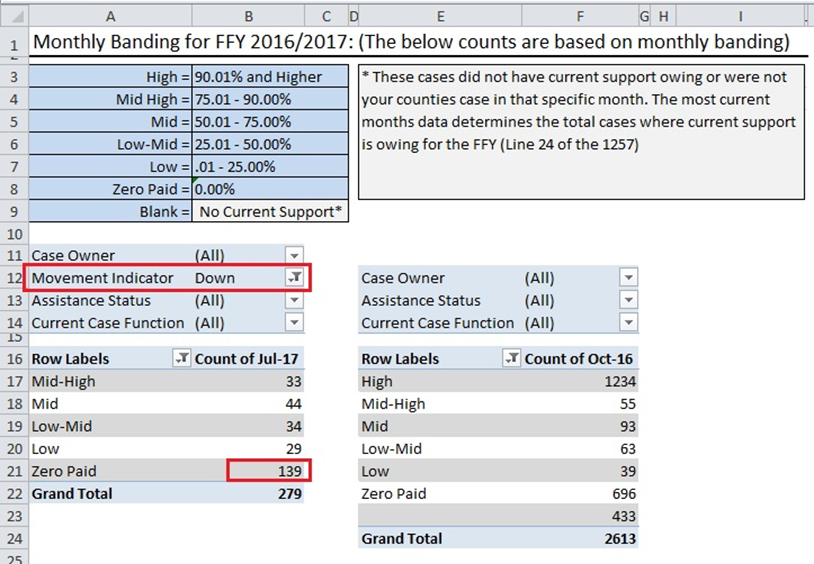 Although as an end-user this format was efficient, the monthly maintenance, DR access, and Excel skills needed to create the pivot tables did not allow counties to easily maintain and utilize the toolkit. Thanks to the tremendous collaboration of CSDA, Frank Shipley and Cort Millward in Alameda, and Phil Kryder in Santa Barbara, a new version of the toolkit is now available in MS Access. The monthly data is available on the LCSA Secure Website and the monthly maintenance and technical knowledge needed is minimal. Below is an example of what the caseworker would see in the new version. 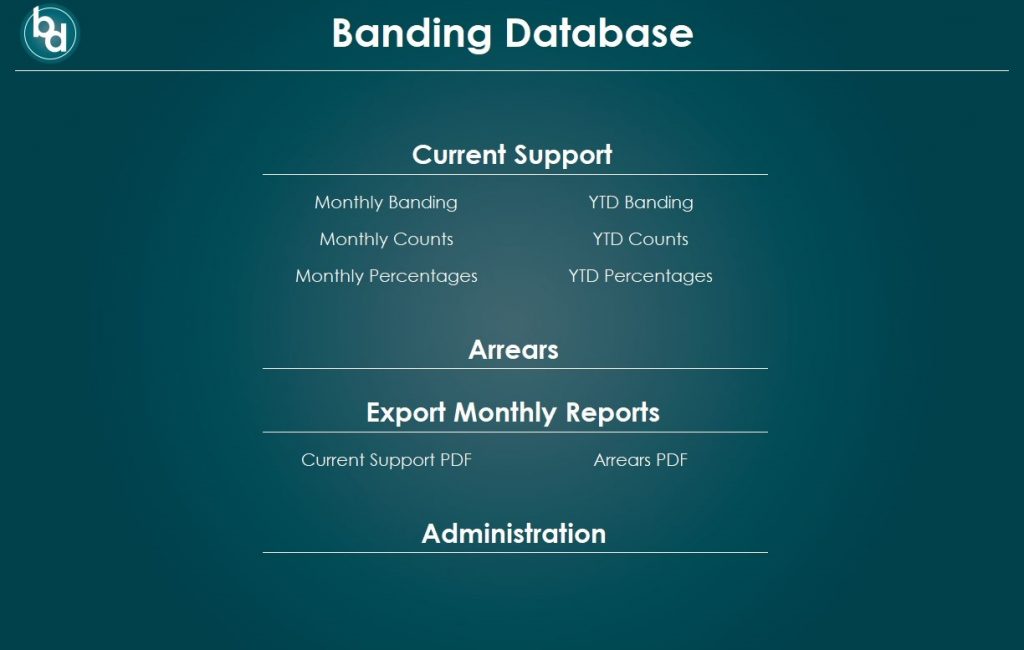 What are we working on now?

Currently we are working on the impact analysis portion of the toolkit. This will allow supervisor, managers, and program performance staff to utilize the data in the Banding Toolkit to measure impacts on current support and arrears collections based on specific interventions taken in a specific month. The tool will allow you to measure impacts up to six months after a specific intervention.

We also are working on improvements in the existing toolkit based on feedback we have received.

Both Frank Shipley and I especially want to recognize Cort Millward in Alameda County for all his hard work. His knowledge and skill in MS Access were invaluable in converting the toolkit into MS Access!

If you have any questions, suggestions, or would like assistance in deploying the tool in your LCSA, please contact me at 530-642-7377 or adam.perry@edcgov.us.

Hamlet aside, there has been a lot of confusion surrounding real property liens in the last couple of months. The turbulence was noted by the CSDA Legal Practices Committee (LPC) and the issue was discussed at the last few meetings.  There has also been ongoing communication with State DCSS.  Senate Bill 2 (SB 2), labeled the “Building Homes and Jobs Act,” passed in September 2017.  The law has a provision that has a profound impact on one of our major enforcement tools, real property liens.  SB 2 adds $75 to the fees already charged to our non-custodial parents (NCPs) when they record a release of a lien that our program filed.  Because this presents a potential onerous burden on NCPs, State DCSS issued CSSP letter 17-11 on December 29, 2017.  To summarize the state’s position:  Local Child Support Agencies (LCSA) must start releasing judgment liens with the County Recorder.  NCPs as a policy would no longer be responsible for paying for the lien release costs.  State DCSS concluded that LCSAs could only be charged $8.00 for a release of lien.  The logic was that the $75 plus other fees could be avoided, and the program would absorb the $8 per lien release.  This would have been a big change for most LCSAs.

However, on January 26, 2018, State DCSS through CSSP Letter 18-02 rescinded CSSP 17-11 mentioned above. The letter states, “Effective immediately, local child support agencies (LCSAs) shall operate as they have prior to the release of the December 29th policy guidance.”

The child support issues surrounding the implementation of SB2 have renewed vigorous discussions about California Child Support program’s lien practices. Should there be a threshold amount of arrears that would have to be met before a lien could be placed on the NCP’s property?  How would this line of thinking impact whether or not to file real property liens on NCPs who are current with their child support obligations.  Furthermore, as it pertains to the fees associated with lien releases, there are arguments that the lien, when issued by the state, is to the benefit of the state, i.e., its use as an enforcement tool.  However, when the NCP wants it released, there is no benefit to the state.  Therefore, the argument would follow that the cost of the lien release is the NCP’s to bear.  Are there unintended consequences by recording real property liens in multiple counties upon establishment of the initial orders in the case?  These questions are among many to consider.

So, I bring you back to the title of this article—To Lien or Not to Lien; That is the Question? I suggest that we as a program look to refine our practices and not place liens on NCPs who do not owe child support arrears.  If this were our policy, lien release costs would clearly be the responsibility of the NCP as their arrears balance caused the lien to be filed and, therefore, they would have the burden to release it.  The costs associated with the recording of the lien release might be included in escrow demands as part of the costs of the sale or transfer of real property.  Or, lien release fees might be passed to the NCPs as a cost of accumulating support arrears, analogous to the statutory cost of interest accruing on a money judgment for unpaid support.    Concerns related to the costs of the lien releases would be with the California Legislature, not with the child support program.

I commend the state for its continuing efforts to address the issue. Perhaps this represents an opportunity for a comprehensive overhaul of lien practices across the state.

In our ongoing quest for additional data to increase our ability to analyze the population we serve, many LCSAs are on a constant hunt for free government datasets (aka “open portals”) that may serve as a launching pad for data that will help us better serve our current customers and help us connect with new parents who can benefit from our services. Today, many states are opting to provide Open Data Portals for transparency and to increase public awareness.

Various social services are provided by each division of Human Services; therefore, the California Health & Human Services Agency (CHHS) found it necessary to create a one-stop Open Data Portal. The Open Data Portal allows users to conveniently explore county data, demographics and population statistics, as well as graphs pertaining to the departments and programs under the direct supervision of CHHS. While California retains ownership of the data and maintains responsibility for all figures published, the Open Data Portal contributes to department transparency by opening non-confidential Human Services data to the public and researchers.

The following departments and programs are under the direct supervision of the California Health and Human Services Agency and have available data on the CHHS Open Data portal:

Each of the aforementioned agencies provide recent and accurate accounting of customers served, costs, locations, and additional pertinent data on the Open Data Portal website, available in Excel, PDF, and CSV files. With no required log-in, the data can be easily searched, filtered, and exported for further use by the LCSA.

How CHHS Data can be Incorporated into Child Support

All data relate back to health, technology, social and personal welfare, land development, and every aspect of how we function and grow as a society. This supplemental data is crucial in helping Child Support identify outreach opportunities, customers receiving other supportive services, and comparing the child support population to those of other programs.

As an organization, we can use the ancillary data to help meet program objectives in addressing customer barriers. While child support services remain our primary service to children in our respective LCSAs, understanding our population and sharing information with our customers about other available services is part of a holistic approach to case management and our effort to make a positive difference in the lives of children.

California Health and Human Services Open Data portal can be accessed at:
https://data.chhs.ca.gov/